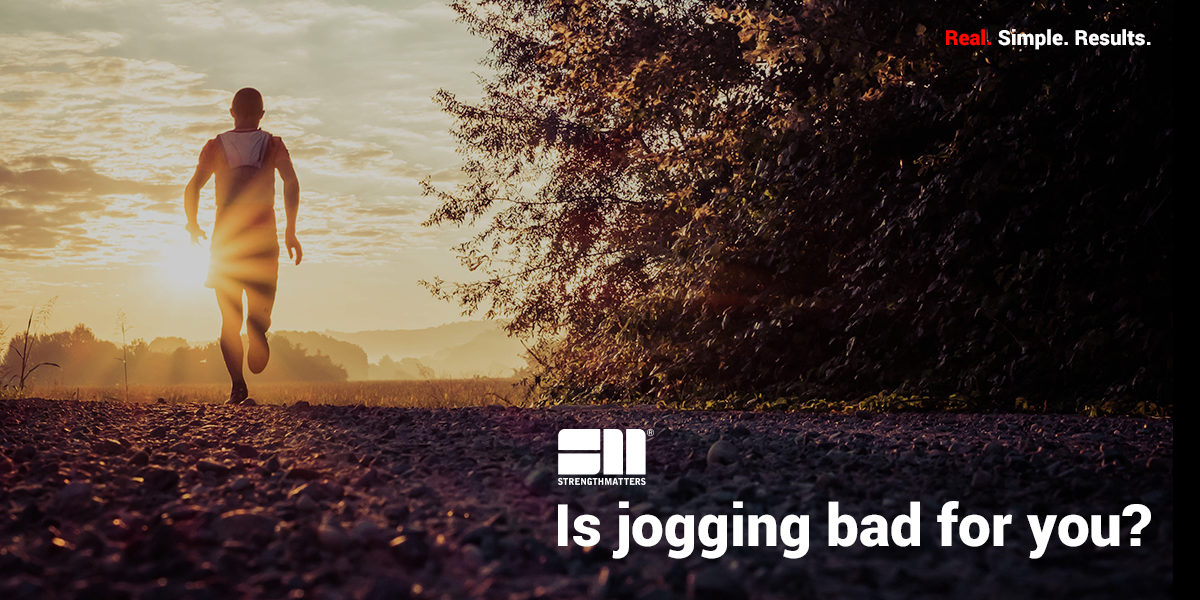 Is Jogging Bad For You?

There’s a common notion in the strength community that humans are only supposed to walk or sprint, not jog. A common misconception is that we are built to sprint from danger or in order to catch our food, but walking is for distance.

Frankly, this sounds like an excuse not to default to one’s strengths by doing cardio. Anyone who suggests this probably hasn’t spent much time in the wilderness. If you need to travel from A to B on foot—such as heading home before dusk after a long day out—the most energy and time efficient method is jogging. Why would you take three hours to walk when you can jog the same distance and be there in one?

Humans are meant to jog just as much as we are meant to locomote our bodies in all other ways. However, jogging is statistically the most harmful exercise that modern, western humans can perform. In the U.S. and U.K. four out of five joggers (people who jog/run at least once per week) pick up an associated injury annually that prevents them from continuing. The problem is that people fail to recognize the root of the cause. The real enemy is not jogging, it is how they spend the rest of their day.

Sitting in a chair for hours every day sends the message to our brains that it needs to adapt to being in that position, so it does. Over time, the body morphs into a human cashew nut (thank you, Perry Nickelston for the awesome imagery). The abdominals and all-powerful glutes go to sleep. The upper back and shoulders round forwards. The hamstrings shorten. And because we don’t sit in the natural human sitting position (a deep squat), we lose the ability to flex our ankles forwards.

The adult head makes up approximately 8% of the entire body mass and if it sits forward by just one inch the negative postural compensations that occur all the way down the chain are profound (one inch forwards equals an extra 10lbs of pressure on the thoracic spine). The human foot is a brilliantly complex, sensitive and robust structure that bears the weight of every step, absorbs and reads the ground it touches then propels our massive bodies in the direction we wish to travel. To seal our postural doom we lock our feet up in tight leather prisons, so the brain does it’s job and adapts.

Things tend to go wrong and injury occurs when a chair shaped human tries to perform any real, natural movement pattern. Instead of floating across the surface of the land, when we jog we tend to drive our heels into the ground, slowing down with every step. It’s impossible for the torso to sit above the point of impact because the hips don’t extend backward and the head sits so far forward. The powerful upper body can’t contribute to the efficiency of the locomotion because the mid- and upper back is locked in place. The path to injury is further accelerated because we tend to perform the inefficient movement of jogging on a hard concrete surface. Deploy violins. We’re buggered. Or are we?

All Is Not Lost!

It’s entirely possible jog without causing injury. However, I suggest your jogging footwear be stored on a back shelf for a few weeks while you make some adjustments to your daily routine by adopting some new habits.

The Greatest Single Change You Can Make

If you were able to make one change to your life that will have the greatest bang for your buck and illicit massive positive changes, this would be it: address your workstation and stand up.

A friend and client who is a doctor informed me that standing still all day long could be as harmful as sitting all day long for the untrained masses. I completely agree that standing in the same spot without moving all day long will probably make things worse. I’m not suggesting that you do this. The adjustments to your workstation should enable and encourage you to constantly move around a standing position.

After a few weeks of standing all day, you can also expect to see very pleasing changes in your body composition because you’ll be burning around an extra 1,000 calories per day. After a few months, you can expect a magical disappearance of some niggling chronic aches and pains.

If your employer is resistant to providing you with a stand-up desk, you could present them with a plethora of research that supports a dramatic increase in productivity and creativity. This is easily found by typing “stand-up desk productivity” into Google. If they still resist, play the medical card. Most private physical therapists agree with the negative health implications of spending all day in a chair. For a small fee they will write a medical note explaining that sitting is causing ill effects to your health.

At this point your employer might try to provide you with a cheap remedy that only elevates the height of your computer but doesn’t encourage all the three-dimensional movements mentioned above. Make sure these factors are covered in your medical note so your employer must provide a proper, sturdy stand-up workstation that you can lean on.

“But standing causes blood clots.” Yes, standing still for prolonged periods could be a tipping factor for a lower limb blood clot, but not the cause. Blood clots are a sign of circulatory problems, usually caused by poor food choices and/or stress.

“But I do yoga three times per week.” That’s great! You perform healthy movement for three out of 168 hours in a week. How many hours do you spend sitting in a chair? What signal is your brain receiving?

Habits For The Chair-Bound Masses

In the case that a proper, three-dimensional stand-up workstation is not possible, I suggest the following habits:

Anti-Sitting Stretches and Exercises For The Office

Spend 30-45 seconds on each and try to work this quick 3-5 minute routine into your day. Ideally, you will do this for every hour you spend seated. But start by including it once every morning and once every afternoon.

The best exercise you can do for running preparation is jumping rope—provided you address your postural issues by following the advice above.

Jogging for distance is a fun activity that can also be very healthy and longevity boosting. It’s great for increasing your cardiovascular capacity and reducing stress levels. However, repeatedly driving our heels into hard concrete for miles on a regular basis is inarguably bad for us and creates injury. I would strongly suggest that all running/jogging is performed on other surfaces such as trails, grass, wooden boardwalks, sand or other natural terrain. If you’re city bound and restricted to running on asphalt, I suggest working on your speed over much shorter distances. Here’s a sample workout idea for city joggers:

This is a much healthier and beneficial way to spend 30-40 minutes.